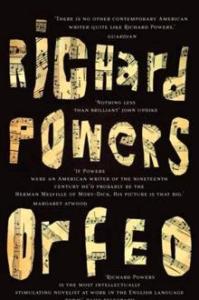 Book 6 is Orfeo by Richard Powers. It’s the story of seventy-year-old Peter Els, a composer and hobby scientist, who finds himself on the run as a terrorist after his home-made lab was raided by Homeland Security.

Out of the six books I’ve read so far since this challenge started, this was the most difficult to get into. It opens with the police arriving at the door of Peter Els. His dog, Fidelio, had suffered a haemorrhage and in a panic, he’d dialled 911. While talking to Peter in his house, the police notice his lab and in a post 9/11 world, they get suspicious.

Incidentially, and slightly embarrassingly, for the first fifty pages, I was convinced this book was set in a dystopian world. The police are insistent that Peter call Animal Control rather than bury the dog in his own backyard. The idea of a government agency taking a pet’s body away just baffled me…

The police call Homeland Security in, who take samples of his work away for examination. What they find lead them to suspect Peter of being a terrorist, and in a panic, he decides to flee. What I loved, in particular, was the trial by media & social media and how random information can be used to condemn you if put together the right way. For example, following the first visit by Homeland Security, he goes online to investigate if it is really possible to grow something lethal in a lab – when he finds himself reading a recipe for how to create ricin from beans, I’m shaking my head in despair.

While this storyline forms the main plot, the majority of the novel deals with flashbacks of Peter’s life – his attempt to first discover, then create, music that moves the soul. His first relationship which led to his decision to major in music composition. The friendship that would influence his life and work. His marriage (and divorce) and the birth of his daughter – his ‘one perfect composition’.

Peter is a flawed character, but one I can identify with. All he wants is to leave something perfect behind – something that moves others in the way certain music once moved him. But as he discovers, when you’re striving for perfection, magnificent just doesn’t measure up.

In terms of the novel itself, it’s one that most definitely requires another reading. There are some amazing sections where particular compositions are explored in depth – in particular, Messaien’s Quartet For the End of Time, written and first performed when he was a POW in WWII.

I don’t want to say that Orfeo opened my eyes, because that’s both an exaggeration and a cliché but for those few hundred pages, it made me think about music differently. It’s another that didn’t make the shortlist for the Man Booker this year, but all I can say to that is that it’s in good company with History of the Rain… 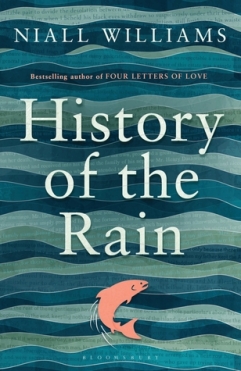 Book 5 is History of the Rain by Irish writer Niall Williams. It’s the story of 19 year old Ruth Swain, who is bedbound in a small attic room in a Co. Clare village. With a possible terminal illness, she distracts herself by recounting her family history. Surrounded by her late father’s collection of books (3,958 to be exact), Ruth is determined to read each of them, to ‘discover’ her father in them. To do this, she needs to go back in time, starting with her father’s grandfather.

It’s a couple of weeks since I finished this book and it’s by far my favourite of the longlisted books I’ve read so far. I was very disappointed not to see it shortlisted. I’m sure that part of the reason I loved it so much was that, being from Ireland, the cultural references each hit the mark intended. The description of the ‘Aisling’ copybooks that Ruth and her father wrote in gave me a sense of nostalgia, the brief references to the recession resonated and the caricatures she drew of the people in her town made me laugh with familiarity (for example, the councillor who’s been known as ‘Saddam’ since going on a trade mission to Iraq).

The writing was beautiful, incredibly so. My only criticism would be that the Random Capitalisation of Key Phrases was a bit jarring at the start. But apart from that, there’s so much to praise that I don’t actually feel like I can do the book justice. Quite simply, I loved it. It was so ‘Irish’ but not in a depressing, maudlin sense – it was just the country I know.

This is my first time to read something written by Niall Williams, but it definitely won’t be my last and I’m delighted to have discovered such a writer that I may not have tried otherwise.