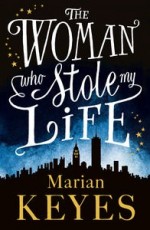 The latest book from Marian Keyes is The Woman who Stole my Life. It’s the story of married mother-of-two Stella, who becomes struck down with a rare disease that leaves her paralysed. The only movement she can make is blinking. Lying in her hospital bed, she learns to communicate with her neurologist, Mannix Taylor, who devises a system of blinking inspired by ‘The Diving Bell and the Butterfly’.

Despite what’s just happened to her, Stella remains mostly positive and over the months spent in hospital, she offers words of encouragement and positivity to Mannix during his daily visits. Once she recovers, these words form the basis of  ‘One Blink at a Time’, which is picked up by a US publisher who send her on a promotional tour around the US.

However, something goes wrong. When we first meet Stella, she is back in Dublin, separated from her husband, putting on weight and desperately trying to write a second book. Over the course of the novel, we slowly find out what happened.

As a long-term Marian Keyes fan, I was happy to learn she had a new novel out. Reading this, it reminded me strongly of elements of two of my favourite books of hers, Rachel’s Holiday (in structure) and The Other Side of the Story (in plot). While I’d rate both of them above this, I still found it to be an enjoyable read and lighter in tone than her most recent three.

My biggest critcism is with the character of Stella. I found her to be very passive. Everything happened to her – even the compilation and publication of ‘One Blink at a Time’. She seemed to spend a lot of time waiting for other people to tell her it was ok to do something, which became quite frustrating. (Although, isn’t there a theory that the characteristics you find most annoying in other people are the ones you don’t like in yourself?)

I also found that the ending wrapped up quite quickly, and a bit too cleanly.

However, a Marian Keyes book, even with some faults, is still worth reading. And there were a lot of good things about this book. The passages with Stella in hospital were strong, especially the growing communication between her and Mannix, her dad reading to her, her husband’s hints of frustration at the situation. I liked the glimpse at the US book tour and the sheer amount of money that’s involved in it. It comes across as much more of a business than the industry in Ireland, where she received a much warmer reception from both the media and her readers.

I also enjoyed that Marian is now writing about older women, who have been through a marriage and have raised their children – many of her previous books dealt with women beginning to settle down so it’s interesting to get a new perspective from her. I liked the idea that a new life can begin at any age.  There’s still a lot of humour in her writing but as always, she deals with difficult issues and handles them with sensitivity.